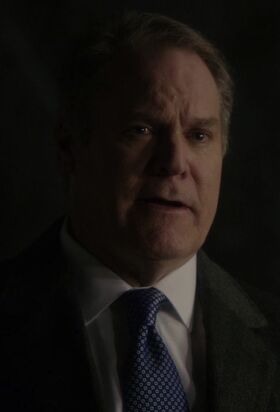 "Special Counsel" was a member of the U.S. Office of Special Counsel which is a federal agency set up to protect whistleblowers and protect against abuse of power. He is one of the original eight people who know about the Machine.

Although his primary responsibilities in the Office of Special Counsel were unknown, Special Counsel oversaw the Machine's relevant function tracking down terrorists and neutralizing them. It was hinted that he was both Denton Weeks and Alicia Corwin's superior, however he answered to someone higher up known only as Control.

Conspiring with Control, he ordered the execution of all the engineers who helped reassemble the Machine, including Daniel Aquino, to help preserve the secrecy of the Machine.

After it was discovered that Nathan Ingram had contacted a reporter to reveal the truth about the Machine, Special Counsel in collusion with Control ordered Hersh to take him out under the guise of a terrorist bombing. (“God Mode”)

Following the disappearance of a laptop which contained the programming for the Machine, when it was stolen by Decima Technologies, he met with Control to discuss it. Control ordered the laptop to be destroyed along with the two agents responsible for losing it, John Reese and Kara Stanton. He assured her it would be done and thus possibly ordered Alicia Corwin and Mark Snow to send Reese and Stanton to the fateful Ordos mission. (“RAM”) (“Matsya Nyaya”)

He sent out a team of hitmen to assassinate Henry Peck after he came too close to finding out about the Machine. (“No Good Deed”)

After Alicia Corwin was murdered, he conspired with Denton Weeks and Hersh to cover-up the case and to make sure that there are no connections to them. (“The Contingency”) When Weeks went missing, he sent Hersh to look for him but Hersh only found him dead. Unknown to Special Counsel, Hersh's actions had drawn the suspicions of Detective Lionel Fusco and he was listening in on Hersh's phone call with Special Counsel through a forced pairing of Hersh's phone. The information Fusco got on Denton Weeks' disappearance from the phone call helped Reese locate and rescue Finch. (“Bad Code”)

He later sent Hersh to kill the "Man in the Suit" but redirected him to Rikers Island after the FBI captured four well-dressed men in a raid. When asked about the four suspects, he ordered Hersh to kill them all. (“Prisoner's Dilemma”)

After Hersh's failed attempt to kill The Man in the Suit at Rikers Island, Special Counsel once again instructed Hersh to find Reese and kill him. This time, Hersh lost to Reese in a hand to hand combat and was stabbed non-fatally. After recovering in the hospital, Special Counsel called him in to deal with more important matters. He then began drafting a letter with his new secretary who, unknown to him, was Root. (“Booked Solid”)

He or Control ordered the hit on Michael Cole and Sameen Shaw, two ISA agents responsible for neutralizing terrorist threats, because they began questioning the source of their information. Cole was killed but Shaw managed to escape. Shaw arranged a meeting with Special Counsel to hand over Cole's research, as she still believed in the Project. She then shot and killed her handler, Wilson, in front of Special Counsel for betraying her and Cole. Unfazed but impressed by Shaw, Special Counsel let her walk away. However he later had Hersh poison and kill Shaw to tie up any loose ends. Unknown to them Shaw survived thanks to the efforts of Reese and Finch. (“Relevance”)

When Root revealed her true purpose to him, she held him at gunpoint in his office and asked for information about the Machine. (“Zero Day”) She later left him strapped to a chair and gagged with his own necktie in a hotel room. He was eventually freed by Hersh and his men. Hersh informed him that Root may have gained full access to the Machine.

Fearing that the entire Northern Lights program was compromised, Special Counsel traveled to the nuclear facility in Washington state where the Machine was installed, only to find that it was not there. He encountered Finch, Shaw, Root, and Reese in the empty computer facility. After berating Shaw for betraying them, he revealed to Finch that he always suspected there was someone more powerful behind Ingram. He asked what happened to the machine and whether it would still generate relevant numbers. He told Finch that the country would be defenseless if they no longer received the numbers and asked Finch to help recover the machine. Finch responded that the Machine moved itself and will determine if it wants to contact them. Finch refused to help in any other way, saying that Special Counsel betrayed Ingram and then killed him.

After Finch, Shaw, Root, and Reese left, Special Counsel received a call from Control and tried to assure her that they would locate the Machine. She however ordered Hersh to kill him, along with the other people in the room. Unfazed by the order he did not attempt to escape. His final words were "fair enough", indicating he understood why he was being killed. Hersh then shot him in the chest. (“God Mode”)

Retrieved from "https://personofinterest.fandom.com/wiki/Special_Counsel?oldid=80922"
Community content is available under CC-BY-SA unless otherwise noted.