View source
watch 01:36
We're Getting Mutants in the MCU - The Loop
Do you like this video?
Play Sound
Super 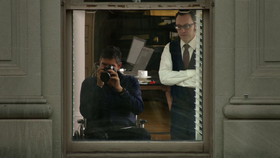 Reese works the computer while Finch does the legwork with their latest POI, a building super who keeps too close an eye on his tenants. Meanwhile, Detective Carter may finally get her long-awaited glimpse into a case.

Super is short for superintendent or building maintenance and management.