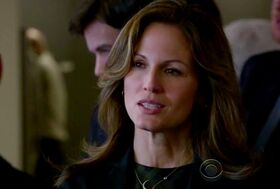 Sydney Baylor was a partner at Baylor Zimm.

Though she was his boss, Baylor was romantically involved with Adam Saunders and, according to Reese, the two were in love. After Adam discovered an insider trading plot and brought it to Sydney, she was murdered in her bathtub with a champagne bottle that she and Adam had drunk from a few nights before and Adam was framed. However, Detective Carter figured out how the killers got their hands on the bottle and exonerated Adam. Reese later learned that Sydney was killed by Elias's men in his plans to fund his private war.

Retrieved from "https://personofinterest.fandom.com/wiki/Sydney_Baylor?oldid=78610"
Community content is available under CC-BY-SA unless otherwise noted.