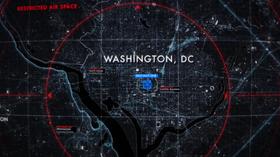 The team must unravel a conspiracy and stay ahead of the Secret Service when the President of the United States becomes their newest POI. Also, Finch separates himself from the team and considers taking drastic action to combat Samaritan.

Synecdoche is a rhetorical term where a part of something is used to label the whole. Among the most commonly used of these expressions is "The White House", which refers to the Executive Branch of the United States Government (i.e. the office of the President of the United States.) In other uses, an individual proffering assistance might offer to "lend a hand", the hand serving as a metaphor for the whole person.

In this case, the President is the part that represents the whole: the American people. The U.S. system of representational government operates on the principle that each representative, whether they be a congress person, a senator, or a the President, is the voice of a specific group of people he/she represents.