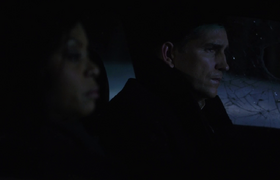 "Terra Incognita" is the 20th episode of season 4, and the 88th produced hour of Person of Interest. It originally aired on April 14, 2015.

Reese finds himself on a perilous personal journey when he takes on a homicide case Detective Carter was never able to close.

The Latin term terra incognita (lit: unknown land) is a cartographic term referring to unexplored or uncharted territory. As the globe was explored, early maps, labeled in Latin, marked those parts of Earth as yet unmapped as terra incognita. The expression and its English translation are also used as metaphors for a new experience or a journey into the unknown. Shakespeare famously called death "the undiscovered country from whose bourn no traveler returns" (Hamlet).