Person of Interest Wiki
Register
Don't have an account?
Sign In
Advertisement
in: Under Construction, Recurring Items

View source
watch 01:36
We're Getting Mutants in the MCU - The Loop
Do you like this video?
Play Sound
The Briefcase 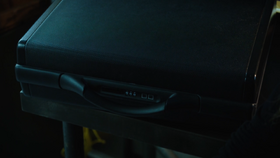 The Briefcase is a custom case used to store and transport the Machine's core code.

When some Decima operatives have a meeting regarding its contents, Root, in the same restaurant they are at, disables the surveillance camera and knocks out everyone present via a toxin emitted from an air conditioner. The tracking device is sturdy so Root has to break it with a high-voltage shock. When she is found by more agents, she blocks bullets with it, having heard that it was "thrown down from a plane, not even a dent". The password for opening it is "314", and inside is a Fabergé egg, which the Machine has Root destroy. (“Search and Destroy”)

With the instruction of the Machine, piezoelectric batteries (from night vision goggles) are installed to maintain the compressed version of the Machine's core code. (“YHWH”) Later in The Subway, when the Machine designates Finch and Root as threats and locks them inside the train, Root smashes the window with it. (“SNAFU”)

It is made of a carbon fiber Kevlar weave. The case is fitted with 70,128GB of RAM. These accumulate a total capacity of 8,960 GB. The case is powered by piezoelectric batteries Root took from night vision goggles, which recharge every time they are moved. There is a light at the briefcase. The blue means the battery is working, red means the remaining energy is limited, and no lights means the electricity is spent.