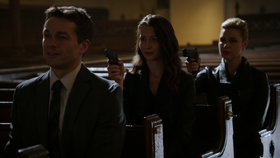 "The Cold War" is the tenth episode of season 4 and the 78th produced hour of Person of Interest. It originally aired on December 16, 2014.

Samaritan shows its power by erasing crime from the city for a day in an attempt to force the Machine out of hiding.[1]

"The Cold War" describes the post-World War II era, when the U.S. and western Europe fought a war of words and political ideals with USSR and the Soviet bloc countries. The period was marked by heightened espionage, expansion of the peace time military and proliferation of nuclear missiles, the building of the Berlin Wall, and a series of pivotal events, notably the Cuban Missile Crisis of 1963. The term has become a metaphor for any conflict where the parties threaten, but do not act.

Greer served in the Special Intelligence Services (MI-6) during the later years of the Cold War. While on a mission uncover a Russian mole, he discovers his superior is a KGB (Russian) double-agent. This leads to Greer's belief that political lines are meaningless, that the ideal of "King and country" held by the British is an illusion, and that loyalty can be purchased for the right price.

Parallels Between Finch's and Greer's Teams

Over recent episodes, Person of Interest has introduced a series of characters serving Samaritan who are parallels to Finch's team. Although the parallels are not exact (Martine is an assassin, whereas Shaw is a sharpshooter who only kills in defense of a POI, and Lambert's activities have far less range than Reese's), the parallels between the characters were fully articulated in this episode.