View source
watch 01:25
Jurassic World: Dominion Dominates Fandom Wikis - The Loop
Do you like this video?
Play Sound
The Crossing 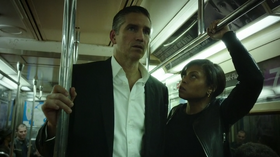 "The Crossing" is the ninth episode of Season 3, and the 54th produced hour of Person of Interest.  It originally aired on Tuesday, November 19, 2013.

Danger closes in when the battle to bring the crime organization HR to justice reaches new heights. Also, when the Machine suddenly gives out Reese’s number, the POI team faces their greatest threat yet.

The Crossing is literally the crossing made by Carter and Reese to bring Quinn to the FBI.

The episode closes with the song "Hurt" written by Trent Reznor and performed by Johnny Cash.