The Day the World Went Away

View source
watch 01:36
We're Getting Mutants in the MCU - The Loop
Do you like this video?
Play Sound
The Day the World Went Away 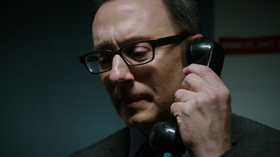 "The Day the World Went Away" is the tenth episode of Season 5, and the 100th produced hour of Person of Interest. It originally aired on May 31, 2016.

100th episode. Finch’s number comes up when a fatal error blows his cover identity and sets off a deadly series of escalating encounters with Samaritan’s operatives.

This episode's title was taken from the Nine Inch Nails song, "The Day the World Went Away", heard during the episode's final scene. The lyrics include:

Critics and fans alike cite "The Day the World Went Away" as one of the best episodes of Person of Interest, with Michael Emerson's dark, emotional performance receiving universal praise. The climactic monologue Finch delivers near the end of the Episode is widely considered one of the best scenes of the series and many believed Emerson deserved an Emmy for it. However, Root's death garnered a heavily polarizing response, with some dismissing it as an example of "Bury Your Gays" and others defending it as a fitting end to a fan favorite character.