The Devil You Know

View source
watch 01:25
Jurassic World: Dominion Dominates Fandom Wikis - The Loop
Do you like this video?
Play Sound
The Devil You Know 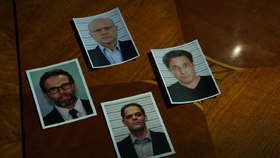 "The Devil You Know" is the ninth episode of season 4 and the 77th produced hour of Person of Interest. It originally aired on November 25, 2014.

Reese and Finch are caught in a power struggle for control of the city’s gangs when Elias is targeted by Dominic, the ambitious leader of The Brotherhood. Meanwhile, Root and Shaw disagree over how to handle a new threat from Samaritan.

The title is drawn from the old axiom "better the devil you know than the devil you don't": when in a bad situation with no good options, go with the bad option you know about rather than the bad option you don't. This would appear to apply to Reese and Finch, who must choose between allying themselves with Elias and helping him maintain his role an organized criminal, or staying out of the situation and letting events transpire as they may, regardless of the consequences.