View source
watch 01:36
We're Getting Mutants in the MCU - The Loop
Do you like this video?
Play Sound
The High Road 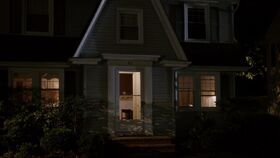 "The High Road" is the sixth episode of season 2, and the 29th produced hour of Person of Interest. It originally aired on November 8, 2012.

Reese goes undercover in an idyllic neighborhood when the Machine's latest number sends him to the suburbs.

"The high road" generally means taking the course of the higher moral ground.