View source
watch 01:36
We're Getting Mutants in the MCU - The Loop
Do you like this video?
Play Sound
The Library 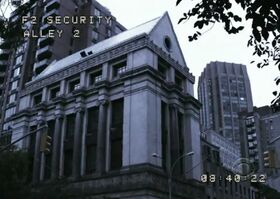 The Library is an abandoned New York Public Library building purchased by a bank Finch owned. Long abandoned, it serves the place where Finch and Reese usually meet and discuss their Persons of Interest cases, as well as their communication center when Reese is out in the field. It also contains the books Finch uses to decode the irrelevant numbers the Machine sends him. Its location is a carefully guarded secret, and only a handful of people know of its existence.

Finch keeps most of his technical equipment in two rooms on the second floor of the building, which are secured by a gate and a pad lock. Various generators set up throughout the building serve as the building's main source of power, which keeps the building off the grid. (“Root Cause”) (“RAM”)

The main workspace is a large, round desk with several computer screens in the middle of the room. There is also a pin board with all of the numbers Finch received during the times when he was working with Reese or his predecessor, Rick Dillinger. A large glass display board with a major crack is used to collect, link and categorize information on current cases.

Finch keeps additional equipment that he uses for audio file handling in a small room located right next to the main room. (“The Fix”) Finch used a third file room in apparently a different part of the building when he first brought Reese to the Library. (“Pilot”)

As the library has never been cleared of its inventory, there are still thousands of books stored on the shelves, which are used to decipher the coded numbers given by the Machine. Finch, being an avid reader, often picks books for himself to read. He has also used them to build a playpen for Leila Smith. (“Baby Blue”)

During the events of “Zero Day”, we learn that the Library was originally the base of operations for Nathan Ingram, in his efforts to save irrelevant numbers. Harold followed Nathan to the library and walked inside, only to discover Nathan's clandestine activities. Nathan mentioned the Library is actually owned by Harold who bought several libraries when the city closed them. Harold considered the series of library closures a tragedy, the decline of Western Civilization. (“Zero Day”)

There's a wall safe hidden behind a book shelf. The Machine directed Reese and Shaw to it by giving them the code to a book, "The Ghost in the Machine" by Arthur Koestler. In the last page, there was an old picture of Harold and Nathan Ingram. After they found the safe, the Machine sent Reese the combination to open it. Inside the safe there was a number of pictures of people connected to the irrelevant list, including that of Jessica Arndt, Reese's former girlfriend. Additionally there was a map of the Unites States of America, marking three secure federal sites used for nuclear fuel storage which were possible locations where the Machine might have been installed. The markings had been made by Nathan Ingram. (“God Mode”)

The Library was abandoned by Harold and Reese, and it was then raided by a NYPD response team shortly after Samaritan came fully online. (“Deus Ex Machina”)

It is located in an abandoned library building that was sold to a bank Finch controls. When the bank declared bankruptcy, the building went into a kind of limbo, disappearing from records. (“Pilot”) There are at least two entries to the Library: one inside a tunnel, (“Pilot”) and another one on the north side of the building. (“Firewall”)

When Root hacks into Finch's network, The Machine monitors and piggybacks off her attack, which pinpoints the location of the Library to a building between Madison Ave and (possibly) East 37th St. (“Root Cause”)

Based on a comparison between pinpoint map from The Machine and a map of New York City, the location lines up with The Morgan Library & Museum at the corner of E 37th St and Madison Avenue. 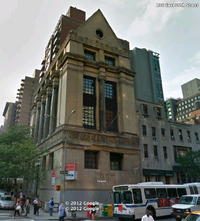 The building was designated a New York City landmark in 1977. It is located at the corner of East 30th St and Lexington Ave.

Only a few characters have been at the library and know about its existence.