View source
watch 01:36
We're Getting Mutants in the MCU - The Loop
Do you like this video?
Play Sound
The Ordos Laptop 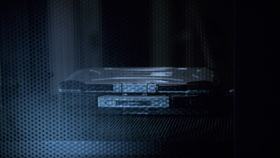 Daniel Casey copied this portion of the code to his laptop, but becomes a person of interest. Harold Finch with the help of Rick Dillinger (his ally before Reese), recognizes the code from his Machine and masterminds a plan to create a virus out of the code to help the Machine protect itself. This backfires to a certain extent when Decima Technologies turns the virus against the Machine. After building a virus out of the code, it was put up for sale on the black market by Harold Finch and eventually sold to the Chinese by Rick Dillinger, who turns opportunist. (“RAM”)

The sale proved to be the catalyst for John Reese's and Kara Stanton's fateful trip to Ordos, China, having been sent after the laptop under the impression that it contained partial source code of a virus similar to Stuxnet. A version of the virus was eventually released by Stanton under the direction of Decima Technologies. (“Dead Reckoning”) The virus attacked the Machine, triggering a hard reset which put it into full administrative mode for a time, and afterward Finch confessed that he had built the original virus, which was adapted by Decima. According to Finch, he "hid a virus within a virus" so when Decima's virus was downloaded to the Machine, so was Finch's. (“God Mode”)

The laptop originally belonged to Daniel Casey, a computer programmer who was hired by the U.S. government to attempt to hack into the Machine in the secret hope that he would find a vulnerability that the government could exploit. Casey managed to find Nathan Ingram's backdoor in the system (“No Good Deed”) and used it to download some of the Machine's code onto his laptop before it shut him out. Seeing the system react this way, Casey began to suspect that the government wanted him to find out how to infiltrate it rather than simply test its resilience. As a result, he withheld the information about the backdoor he had found when he told his employers that he was finished testing the system, before he was sedated and taken away somewhere to be killed. He managed to escape when his captors died in a car crash on their way to dispose of him, and he took his laptop with him. The government was on Casey's trail following his escape, framing him as a traitor so that the CIA would pursue him. (“RAM”)

In December 2010, some two months after Casey was hired by the government, Finch receives his number from the Machine. Finch's partner Rick Dillinger sees that Casey is being pursued by both the CIA (in the form of Reese and Stanton) and an unknown man, and tries to approach him when Reese and Stanton ambush them. Several shooters working with the other man then attack, distracting Reese and Stanton and allowing Dillinger to escape with Casey and bring him to the Library.

Finch tells Dillinger to guard the Library from outside due to his frustration at his partner's aggressive attitude. Casey then pulls out his laptop and explains his story to Finch. After examining the laptop and its contents, Finch realizes that Casey was working on the code he programmed into the Machine. Casey explains that he found the backdoor. Finch decides to "tweak" the code Casey extracted, constructing a virus from it that would teach the Machine how to protect itself, and Finch puts it up for sale on the black market in an effort to protect Casey, at least from the unknown party, and with the added motive that the code would be used to try to infect the Machine, but that Finch's virus within a virus would free the Machine to act independently.

Dillinger, having listened in on the whole conversation, walks into the Library and takes Casey's laptop, saying that a third party, the Chinese, are interested in buying it. He drugs Finch and tells Casey to continue running.

Finch follows Dillinger to Central Park and attempts to console him and save him from certain death, but Finch cannot bring himself to reveal the existence of the Machine to someone as unethical as Dillinger. Dillinger, feeling mistreated, says goodbye and tells him not to follow him. Finch nonetheless does, and watches from behind a tree as Dillinger gives the laptop to a group of Chinese men and is then shot. An ISA assassin opens fire on the group, but one of the buyers escapes with the laptop. Dillinger is shot dead by the assassin, who reveals herself to be Sameen Shaw. (“RAM”)

An American politician or agent is responsible for selling the Ordos laptop to the Chinese. Mark Snow assigns Stanton and Reese to abduct the man on American soil who is identified as U.S. "government." ("Blue Code")

The laptop later made its way to a facility in Ordos, China. Control orders Special Counsel to send the two responsible for the loss of the laptop, meaning Reese and Stanton, to Ordos to make sure it is destroyed, and then Control orders their deaths. Alicia Corwin is assigned to track Reese and Stanton to Morocco where she relays the orders to Mark Snow who sends Reese and Stanton on a mission to retrieve the laptop. After which, Mark Snow orders each to "retire" the other as a way of tying up the loose ends from their pursuit of Casey and contact with the laptop. This also ensures the destruction of anyone in China who has had contact with the laptop, because Control will not risk letting anyone live who may have seen a portion of the Machine's programming. When they arrive at the location, a tech facility in an abandoned company town, they find a number of Chinese employees assassinated in the midst of a seemingly ordinary day, and one man still alive. Stanton questions him in Chinese about what had happened and shoots him when he describes "them" as taking "the machine".

As Reese and Stanton explore the site, they notice a list of 17 digit numbers with corresponding Chinese characters, but pay it little mind. Reese finds the laptop in a locker inside one of the offices that were raided, and slowly realizes that there is something odd about a raid that would do such extensive damage, yet leave the laptop behind. Reese puts the laptop in his bag and they leave the facility to wait for extraction.

Later on, Stanton puts the laptop into one of her bags and starts signaling the extraction team. Reese prepares to execute his orders to kill Stanton but backs off at the last moment, and Stanton turns around and shoots him in the gut. Reese realizes that they were told to kill each other so that everyone who came in contact with the site and the laptop would be dead. Seconds later, the CIA blows the place, destroying all evidence; however, Reese, Stanton, and the laptop all survive. Mark Snow hears that a dissident group helped an injured CIA operative escape. Snow thinks it's Reese. But it turns out to be Stanton. (“Matsya Nyaya”)

After the attack, the laptop was taken by Greer, a mysterious Englishman who found Stanton recovering after the attack and took over her medical care. He meets her in a Chinese hospital and shows her the laptop, offering her answers to why her government was so eager to destroy the laptop and kill her in the process. Kara has little interest in the laptop. Greer offers her a chance for revenge. In the end, her true motive and goal is to follow Greer's instructions so that she can find out who is ultimately responsible for the order to have her killed. (“Dead Reckoning”)

Greer offers Kara to tell her the truth about who sold the laptop and initiated the Ordos mission if she started to work for him and his organization. (“Dead Reckoning”)

Stanton breaks into a DOD facility and loads a virus onto the Internet on Greer's orders; in return, Greer tells her the name of the man who sold the laptop in the first place: Harold Finch. (“Dead Reckoning”)

Alicia Corwin resolves to destroy the Machine. She tracks down Finch, but is killed by Root. After Alicia Corwin's death, an RFID chip is found to be implanted in her shoulder with all the information she has gathered in her investigation into The Machine. Special Counsel calls his boss and tells her that Alicia Corwin believed someone leaked part of the Northern Lights source code on the Ordos Laptop to Decima Technologies who Special Counsel believes is intending to use it to destroy the Machine.

At Thornhill Corporation, Reese and Shaw encounter John Greer of whom Reese demands that he stop the virus. Greer refuses but tells them that Decima Technologies did not create the virus but rather adapted it from one they found on the Ordos Laptop. Greer tells them that Decima Technologies was able to get a hold of the Machine's code and create the virus because of the man who put the laptop up for sale on the black market: Harold Finch. Greer notices that Reese recognizes the name but admits to being unable to put a face to the man who sold the laptop himself. (“Zero Day”)

After discovering the Machine had moved itself to an unknown location, Finch reveals that he purposefully let the laptop with his code be taken as he knew that someone would try to take control of the Machine. By having Decima use the code from the laptop, Finch "hid a virus within a virus" that taught the Machine how to protect itself. (“God Mode”)