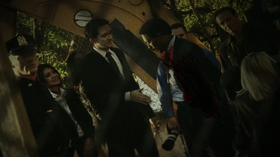 "The Perfect Mark" is the seventh episode of season 3, and the 52nd produced hour of Person of Interest. It originally aired on November 5, 2013.

The number of a hypnotherapist comes up whose life, upon investigation by the team, suggests he is more than just a master of the mind. Meanwhile, Carter tracks an antique dealer whose business is connected to HR.

A "mark" is a target for a crime especially with reference to confidence tricksters. The perfect mark is someone ideally gullible.

This episode is reminiscent of the movie Matchstick Men where it is the conman himself that is being conned.