View source
watch 01:25
Jurassic World: Dominion Dominates Fandom Wikis - The Loop
Do you like this video?
Play Sound
The Subway 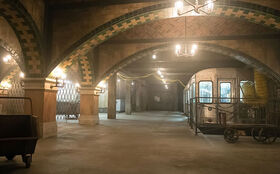 The Subway is the new headquarters for Reese, Finch, and Shaw. The Subway is an abandoned Interborough Rapid Transit Company (IRT) repair siding that was built in the 1930s and remained operational until the city of New York's new water main system forced its closure. The team moved its operations there after they abandoned the Library when Samaritan came fully online and began searching for them. (“Deus Ex Machina”)

The Machine lead Finch to the site by embedding spelling errors in Harold Whistler's doctoral dissertation. After overcoming some reluctance to rejoin the team, Finch fitted the Subway with a new surveillance and communications station inside an abandoned subway car. The space is much larger than The Library, and is free from surveillance by Samaritan.

The Subway's entrance is located in front of Chinatown Express, an express delivery service at 17 Doyers Street, one of the oldest commercial streets in Chinatown. (“The Cold War”) Access is via flights of stairs, which are marked as the entrance to a barber shop. Several flights down, the stairway leads to a storage area. On one wall, a vending machine hides the entrance to the Subway itself. To enter, team members insert two coins and enter the code 3141, the first four digits of pi, into the machine's keypad. The vending machine opens, leading to one additional flight of stairs down to the platform.

The Subway is fitted with a single subway car, #2306. The car is R-62A (late 80s) era rolling stock[1] with blue plastic seating and a contemporary MTA logo. The car contains Finch's work station, ammunition lockers, and a bed for Bear. Initially, Finch uses the car windows to post data on their POI. Later, Finch adds a desk with a computer terminal and a freestanding glass board that sit outside the car, while Reese and Shaw have installed an ordinance locker on one wall.

Equipment in the car and elsewhere in the siding is a mix of modern equipment that Finch, Reese and Shaw were able to bring from above and found equipment from the era when the station was in use. Although Finch did not indicate when the repair siding ceased operation, the MTA logo and powered third rail suggest the closure was recent. Sounds in the station also suggest that there is an active subway line nearby.

The subway car and siding are powered by the system's third rail, the power supply that drives the electric subway trains. The third rail is powered at 625V DC, which requires conversion to 110V AC used by conventional American electrical devices. Using older equipment, Finch was able to build a converter, making their power supply possible.

In keeping with the mesh network Reese, Finch and Shaw use to communicate, the Subway is a mixture of old and new technology. The set is fitted with nine period-style chandeliers that resemble gas fixtures which have been electrified, as would be common in that time period, as well as 24 wall sconces. It includes makeshift wiring running across the ceiling, connecting the lighting fixtures. Painted wooden benches suggest an earlier time period, while two period handcarts might have been used to haul equipment at one time.

The Interborough Rapid Transit Company (IRT) opened the first electrified subway system in New York in 1904. The original service ran from City Hall to 145th St and Broadway, in the Harlem. In the early days of service, the IRT was not universally accepted, with many feeling the first trains were uncomfortable and potentially dangerous. But as service became more reliable, the city embraced the line, which expanded out of Manhattan and into the Bronx until 1918. The line operated as an independent service until 1940, when it was purchased by the New York City Board of Transportation and absorbed into the Metropolitan Transit Authority (MTA) rapid transit system. Today, it is part of the A Division of the MTA.

Although there had been discussion of underground rail service for nearly 20 years prior to the opening of the IRT, along with some experimentation with underground steam railways, notably London's Metropolitan Railway and New York's Pneumatic Railway, it wasn't until electrification was possible that expansive subway service became a practical alternative to elevated railways such as were running in New York and Chicago at the time. Also key to the IRT's growth was the development of tunneling equipment that improved on the previously used "cut and cover" method of subway tunnel construction.

Abandoned subway stations and railway sidings are common in large cities with extensive rapid transit systems, such as London, New York and surprisingly, Los Angeles. As ridership, equipment, routing and the world above ground change, stations must be rebuilt or relocated. Others are simply abandoned, often with their architectural features and period signage in place. Exploring these stations has become the pursuit of amateur urban archeologists, some of whom keep detailed photographic records.

The Subway's architecture is modeled after abandoned stations such as the City Hall IRT station, the jewel of the IRT, as well as the arches and vaults of older stations near Grand Central. Closed since the 1940s, the City Hall Station was designed in the arts and crafts style of the Edwardian era (1901-1910), a cleaner school of design that developed in response to elaborate high Victorian architecture, which took its inspiration from classical Greece and Rome.

Taking its inspiration from the City Hall station's arts and crafts design, the Subway features Romanesque influences, notably its arches, use of brick, and warm coloration. The set is made up of series of low arches, including four-centered (sometimes called Tudor) arches, which create the appearance of a grid. The top-front of the arches are covered in herringbone brickwork. The arch fronts are faced in cream-colored ceramic "subway" tile, edged with green and cream tiles in a repeating pattern creating dentillations. On one wall, a tile IRT logo recalls the Subway's origins.

The light fixtures were hand-made by the Milton Douglas Lamp Company of Battle Creek, Michigan.[2] They consist of iron pipe and other plumbing fixtures and use reproduction 1910 squirrel cage light bulbs made by the Antique Bulb Company.[3] Finch's chair is a vintage industrial drafting stool provided by Marzipan Mummy from Westchester, New York.[4]

Doyers Street, where the Subway is accessed, is one of the five original streets in Chinatown. Chinatown and the adjoining Five Points neighborhood (seen in the film Gangs of New York), began to develop in the mid-1800s, when waves of Chinese and Irish immigrants first came to New York. From their earliest days, the two neighborhoods were largely home to poor immigrant families living in tenements, some of which lined Doyers Street. Doyers Street also became a focal point for Tong wars, as rival gangs fought bloody battles over territory with hatchets. Over time, as Irish immigrants moved away, Chinatown expanded into the old Five Points neighborhood, the center of which is now Columbus Park.

Buildings such as the one where the Subway can be accessed often had below street-level floors. These came about either because the buildings once housed kitchens with wood-fired stoves, because the street level was raised or because the lower floors were used to store goods, were part of extended systems of tunnels, and allowed access to plumbing or other utilities. These below street level floors were often used for a range of criminal activities, including bootlegging during the Depression and meetings of Chinese secret societies (Tongs).