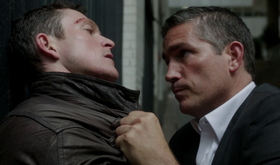 "Triggerman" is the fourth episode of season 2, and the 27th produced hour of Person of Interest. It originally aired on October 25, 2012.

When The Machine gives them the number of a mob enforcer whose life becomes endangered, Reese and Finch must decide whether to intervene or allow karma to balance the scales of justice. Meanwhile, Finch seeks aid from an unlikely source.

A triggerman is a gangster who specializes in gunning down people.

The writers are reluctant to show Reese actually killing anyone outright at the end of an episode since Cura te ipsum. The implication is that no one gets away with their bad deeds, but whether Reese actually kills them or sends them to a Mexican prison is left to the viewers discretion. There is however the implication from the sound of a silencer gunshot.

"The Greatest" by Cat Power - End of the episode