View source
watch 01:36
We're Getting Mutants in the MCU - The Loop
Do you like this video?
Play Sound
Trojan Horse 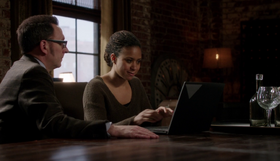 "Trojan Horse" is the 19th episode of season 2, and the 43rd produced hour of Person of Interest. It originally aired on April 4, 2013.

When the number of a leading tech executive comes up, Finch infiltrates her corporation to gather intel, but can't determine whether she is working in her company's best interest, or planning to destroy it from the inside. Meanwhile, Carter continues to question Cal Beecher's integrity after he provides incriminating information about a fellow detective.

The term Trojan Horse has its origins in Greek mythology, based in the tale that the ancient Greeks hid themselves in a large wooden horse presented as a gift to their enemies, the fortified city of Troy. When the Trojans pulled the massive horse into the city, the Greeks attacked and won the war. The term has come to mean anyone who enters an organization via subterfuge with the intention of doing harm. In computing, a trojan horse is a program designed to trick users into running it, generally the outcome is damage to the user's system.