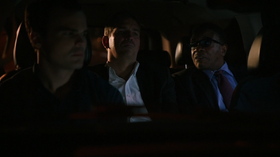 "Truth Be Told" is the third episode of Season 5 and the 93rd produced hour of Person of Interest. It originally aired on May 10, 2016.

Reese’s cover could be blown when he realizes the latest POI has ties to his old colleagues in the CIA.

"Truth be told" is an expression one uses before admitting something they have previously hidden.

In the flashbacks, we see Reese and Stanton being selected for a mission to find a potential mole in the U.S army, following a hijacked weapons shipment.

They interrogate the suspect, Paul Duncan, and following the interrogation, John shoots him. It is later discovered that Duncan's suitcase contained a false bottom, meaning that Duncan had lied to Reese and Stanton.

Cocoon above! Cocoon below!
Stealthy Cocoon, why hide you so
What all the world suspect?
An hour, and gay on every tree
Your secret, perched in ecstasy
Defies imprisonment!

An hour in Chrysalis to pass,
Then gay above receding grass
A Butterfly to go!
A moment to interrogate,
Then wiser than a "Surrogate,"
The Universe to know!