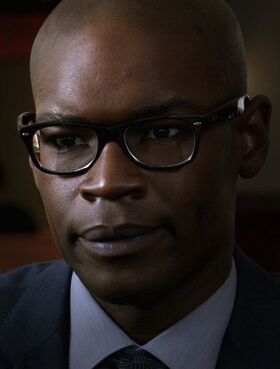 Tyrell Evans was the alias of a CIA Operative, partnered with Mark Snow. He assisted him in trying to "retire" Reese along with other assignments. He was shown to be an expert sniper and good with computers. He appeared many times with his partner, Snow. It is unclear how much he knew of Snow's history or the reasons Reese was viewed as a threat. (“Number Crunch”)

He shoots Reese in the torso and leg while his partner Mark Snow distracts Reese, almost killing him, but fails to find him afterwards as the lights are shot out by John right after. He later tells Snow he was only aiming to wound as they wanted Reese alive. He spends the next month helping Snow tail Carter to try to find Reese before they chase after Reese's fingerprints found on a medicine bottle in veterinary clinic in Connecticut, unaware that it was planted by Detective Fusco on Finch's orders. (“Number Crunch”) (“Super”)

When he and Snow receive a tip about a possible location on Reese at a hotel in the city, the two entered the room guns drawn. However, they are for some reason unable to correctly cover the room, and are shot by an assailant standing behind the door before they can return fire. Evans is killed by the shot. The assailant then turns out not to be Reese, but Kara Stanton. (“Matsya Nyaya”)