View source
watch 01:36
We're Getting Mutants in the MCU - The Loop
Do you like this video?
Play Sound
Vigilance 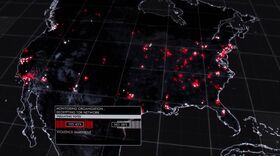 Vigilance is an organization dedicated to protecting people's privacy. They believe the end justifies the means and, if necessary, commit, among others, kidnapping, assassinations, and cyber terrorism, without regard to innocent bystanders. Founded by Greer, their actual purpose is to shut down the Machine, and force the U.S. government to grant Decima its surveillance feeds.

John Greer founded Vigilance and recruited Peter Brandt to lead one of its cells, giving Brandt the alias Peter Collier.

Collier kills Wayne Kruger, and before doing so, reveals he is a member of an, at-the-time unnamed, group whose goal is to protect people's privacy rights. (“Nothing to Hide”)

Timothy Sloan and Finch find a storage unit with fluorescent code written on the walls. Despite an attempt to blow them up, they escape. Vigilance later ambushes Sloan and Reese at Jason Greenfield's (a former member) apartment. They kidnap sloan, fearing he learnt something about them during his investigation into Greenfields death. Worried the latter, currently en route to a black site, may tell the CIA about Vigilance, Collier departs to kill him, and on their way, tells Sloan his brother's death was staged. Despite the ambush's initial success, Team Machine intervenes, forcing Collier to shoot Sloan in the leg so he can flee while Reese saves Sloan's life. Root gives Greenfield a new ID and sends him off to Cartegena, Colombia. (“Mors Praematura”)

Vigilance later finds out about Samaritan, and its creator, Arthur Claypool. As they attempt to locate the drives and kidnap him from the hospital, their plan is foiled by Team Machine. (“Lethe”) When Finch and Claypool find themselves in a bank vault to obtain Samaritan, Vigilance attacks the bank. After Finch refuses to hand them and Claypool over, he locks the vault door, forcing Vigilance to blow it open. Finch convinces Claypool to destroy the drives and, when Vigilance blows the door, Shaw uses a second explosive to blow a hole to the sewer. On their way to escape the three are stopped by Vigilance, but rescued by Reese and Fusco. (“Aletheia”)

Vigilance runs into Team Machine, as they attempt to kidnap Cyrus Wells. Having intercepted a Decima communique, the group fears Wells will grant Decima access to the laboratory a NSA super-processor needed to run Samaritan is kept. The group storms Cyrus' apartment, but Root escapes with Wells and Reese takes them out. However, they manage to lock Shaw up after she takes out a Vigilance sniper. As she makes her way to the exit, she is surrounded by Vigilance. Collier asks her to join him, thinking she wants revenge. She takes out everyone except Collier, who promptly walks out. (“Root Path (/)”)

A Vigilance member kills Leona Wainwright by posing as a cab driver and setting of a grenade inside the taxi. Wainwright was targeted because as a clerical assistant to the Office of Personnel Management, she knew the names of government officials with access to her department, and by extension those connected to Northern Lights. As Finch and Fusco attempt to steal the files in Wainwright's safe, Vigilance, led by Collier, raids the the evidence lockup and forces Finch to hand over the files, holding Fusco at gunpoint. Root surfaces and fires at Collier, who escapes unharmed and exposes the black budget he stole. As information about Northern Lights leaks, Control is forced to shut down her operation. A little while earlier, Vigilance targeted Reese and Shaw, using information leaked by Root in an attempt to identify their latest method of communication. After Reese takes out an operative posing as a former high school student at the reunion they were attending, Vigilance sends more manpower but is unable to kill or kidnap them. (“Most Likely To...”)

Vigilance kidnaps Control, Manuel Rivera, Ross Garrison, John Greer and Finch, and, in the process, kill Kyle Holcombe and cause a blackout in NYC. They stage a trial to expose the existence of a mass surveillance system, the Machine, and stream it live all around the world. (“A House Divided”)

After they execute Rivera and interrogate Garrison, they accuse Control of being in charge of Northern Lights. In an attempt to save Control from execution, Finch tells Vigilance what they want to know about the Machine. After a guard post is raided, they move to a rooftop nearby where Greer reveals he created Vigilance and the trial was broadcast to a single office, not the entire world. Control and Garrison are escorted to Washington, Decima kills Collier and attempts to shoot Finch, who is saved by Reese. When the power comes online, an explosion kills police officers, Vigilance members and others in and around the courthouse. Vigilance is blamed for the attack and Garrison grants Greer the NSA's feeds. When Samaritan comes online, the remaining Vigilance members are terminated. (“Deus Ex Machina”)

Vigilance uses several methods to communicate and changes them frequently: