Person of Interest Wiki
Register
Don't have an account?
Sign In
Advertisement
in: Male Characters, Persons of Interest, Characters,
and 2 more
English 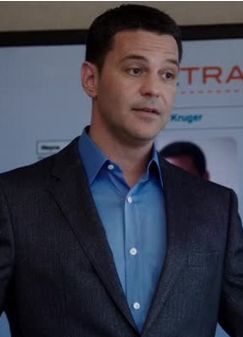 Wayne L. Kruger was an internet entrepreneur and data broker. He founded and served as CEO of Lifetrace, Inc, a business collecting and disseminating for profit the private habits and details of internet users, sometimes with dire consequences for the individual.

Kruger attended the Spokane Polytechnic Institute, and was married to Dierdre, known as DeeDee. In 2001, he was arrested for DUI in Spokane, Washington, and later filed for Chapter 7 bankruptcy in California. He had a second DUI in Palo Alto, California, and was later arrested for possession of a Schedule I substance in Spokane, WA.

Reese and Finch received Kruger's number from the Machine. Reese watched him from outside while Shaw posed as an employee and spied on him inside the building. Kruger went to a meeting with a company called Riverton, which was interested in purchasing Lifetrace data. Kruger explained his company, and showed it's power to executive Aubrey Hayes when he revealed his knowledge of the expected birth of Hayes' child. Kruger had also been tracking Hayes' eating habits, and told him that his wine consumption had reduced and his dairy consumption had increased.

During Kruger's anniversary party, a slideshow of pictures of him and his wife were shown. Suddenly, the video changed to one of Kruger having sex with another woman, angering his wife and guests. Enraged, he told everyone to leave. Reese warned that they should find whoever is responsible before he does.

Kruger's secretary Haley walked out on him when he arrived at work, because she received a recording of Kruger's sexist comments about her. He then saw Hayes and Riverton executive Peter Collier walking by. Collier told him that the deal with Riverton is off after what they just saw. Kruger walked into the meeting room and saw his assistant Barry Timmons and a few other Lifetrace executives waiting. Kruger was horrified to see his criminal record on his profile page, and Barry told him they've made a vote and Kruger is out.

Kruger went to an elevator, and got a call from an anonymous robotic voice. The elevator began to drop at full speed, but stopped at the last second. Kruger staggered to his car and drove off before Reese could pursue him. In his car, his radio system played the sex tape from the anniversary, and then the car went out of control and crashed. Reese found him and took him to a safe house.

At the safe house, Finch learned of Stu Sommers, a man whose daughter was killed by an ex-boyfriend after he used Lifetrace to stalk her and find her. They confirmed that Sommers' past engineering skills gave him the ability to control the elevator and Kruger's car. Reese and Shaw went to find him while Kruger waited with Finch. He attempted to call his wife, and Finch checked his message box. There was one from Collier telling them to meet at the Mayfield hotel, and that Riverton was interested. Kruger learned that Sommers got to the recording, knocked out Finch, and left.

At the hotel, Kruger found Sommers waiting for him and brought him to Collier. There were no Riverton executives there, and Kruger pulled out a gun and held it to Sommers' head. Sommers wrestled it out of his hands and aimed it at him. Reese intervened and talked Sommers out of doing it, and suddenly, Collier shot Reese and Kruger. Collier revealed himself to be the mastermind of the operation, and said that he represented a group of people who have vowed to fight back against the abuse of Internet privacy. He then killed Kruger and left. (“Nothing to Hide”)

Kruger's death was later mentioned by Jason Greenfield as the reason behind why he left Collier's organization Vigilance, as Jason told them about Kruger only intending to scare him, but they killed Kruger anyways. (“Mors Praematura”)