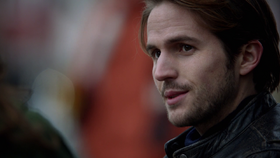 William "Will" Ingram is Nathan Ingram's son. He is a doctor currently working with Médecins Sans Frontières (Doctors without Borders) in Africa. After his father's death, Will began to delve into what kind of work Ingram was working on.

Will is arrested for gambling in an underground casino and Finch is called to bail him out. He returns to the loft that he shared with his father and prepares to send some of his father's things to storage. During this time, John Reese begins to take an interest in him and assigns Detective Lionel Fusco to gather information on both Finch and Will.

Later, Will begins to go through his father's documents, including some involving an audit his lawyers had done after he inherited his share of IFT. He has little working knowledge of computers and is unaware of what his father was working on and wants to know more. He discovers that there was an invoice identified only as "services" in the amount of only one US dollar, as well as the fact that the employees were given severance after IFT was shut down. Finch lies and claimed to have no knowledge of the situation. (“Legacy”)

Will begins to investigate further, and manages to unearth the name of Alicia Corwin, an employee of the White House who dealt with his father. He also finds a note written on a bar napkin wrapped around a champagne cork mentioning the Machine. When he shows this to Finch and mentions Corwin's name, Finch continues to feign ignorance, but secretly clones Will's phone.

Later, with Finch surveilling them from a distance, Will meets with Corwin at a park and asks her about the Machine as well as the one dollar transaction. Corwin claims that IFT was on the verge of bankruptcy and that she struck a deal for the government to bail out IFT in exchange for Ingram's patents. She tells Will that Ingram was in a dark place at the time. She urges him to let it go, to which he replies that she sounds just like his "Uncle Harold". Spooked, she ends the meeting and flees the park.

Unsatisfied with what he found, Will visits with Harold at the IFT offices to let him know he is leaving to take up an offer to work in Sudan and continue his health services. He tells Harold that he is disappointed to have learned that his father was just an ordinary man. Harold tells him that his father always claimed that his proudest achievement in life was his son. Accepting this, he bids farewell to Finch and departs. (“Wolf and Cub”)