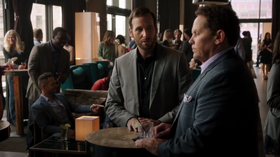 "Wingman" is the third episode of season 4, and the 71st produced hour of Person of Interest. It originally aired on October 7, 2014.

Finch recruits Fusco to stick close to the latest POI, a professional “wingman,” but learning how to approach women soon becomes the least of his worries. Meanwhile, Reese must find a way to play by the rules at his new day job as the Machine sends Finch and Root on a mysterious errand.

A wingman is a person who supports another in a challenging situation. The term originates with military aviation, and refers to the pilot(s) who fly alongside and slightly back from the lead plane in a two-plane "wedge" formation. It has come to mean a man who helps or supports a reluctant friend in a difficult social situation, such as Andre Cooper does for Fusco. It is often said that a wingman "has your back" in social settings.