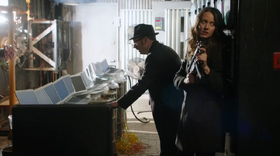 Season Finale. "YHWH" is the 22nd episode of season 4, and the 90th produced hour of Person of Interest. It originally aired on May 5, 2015.

Finch and Root race to save the Machine, which has been located by the rival AI, Samaritan. Also, Reese is caught in the middle of the final showdown between rival crime bosses Elias and Dominic.

YHWH is the western alphabetic rendering of the tetragrammaton, the four Hebrew consonants (written in Hebrew HWHY), revealing the name Yahweh, the God of the Israelites, to Moses. YHWH represents "god."