Person of Interest Wiki
Register
Don't have an account?
Sign In
Advertisement
in: Characters, Male Characters, Minor Characters,
and 3 more 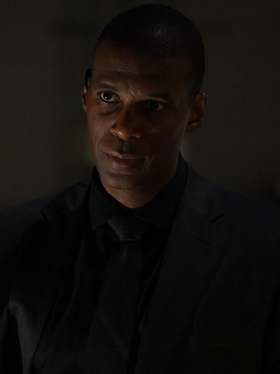 Zachary is a high ranking operative for Decima Technologies and later Samaritan.

After their abduction of Grace Hendricks is foiled by Reese and Shaw, Greer calls upon Zachary and orders him to take all operatives into the field, bring him Grace and kill everyone else.

After Samaritan tracks Grace to the 8th precinct, Zachary positions himself and his men outside but is ordered by Greer to wait as they try finesse first. Upon discovering that Root is aware of Zachary's team, Greer orders them pulled back to outside of the camera views. After the Team uses the distraction of an explosion to escape in an unmarked police car, Zachary hits their car with an SUV and removes Grace from the car. Greer orders him to take Grace and kill everyone else, but when Reese opens fire on him, Zachary is forced to flee with just Grace. He later sets up a table for Greer and Grace to talk at in Decima's base.

After Greer finishes speaking to Grace, he contacts Zachary who tracks Finch's car and pulls it over. However, Zachary discovers that the Team gave the car to a homeless man and realizes that its a distraction. Greer realizes that Zachary and his men are on the other side of town from Decima's base and that the Team is on their way there.

Zachary leads the Decima agents at the exchange for Grace and Finch, leading a blindfolded Grace from his SUV onto the bridge. As the exchange starts, Zachary tells Grace to walk in a straight line for 100 paces and takes Finch away once he reaches Decima's side of the bridge.

As Greer and Senator Ross Garrison watch the police apprehend Kirill Ivanov, a terrorist identified by Samaritan, Zachary acts as their driver. Once Garrison is gone, Zachary asks if they will now lose the feeds which Greer confirms, but tells Zachary that they got something more valuable in Garrison's confidence and Finch. (“Beta”)

As Samaritan works to destroy the Machine, Zachary and his men arrive at the electrical substation and Zachary offers Reese, Finch and Root their lives if they leave. Instead Reese, guided by the Machine in God Mode, engages Zachary's men, killing or knocking them all out. Zachary is one of the ones that survives the fight. (“YHWH”)

Zachary chases Reese and the Briefcase across city, later corners him, engages him in hand-to-hand combat, gains the upper hand, but is knocked out by Finch. He negotiates a deal with Bela Durchenko to hand over Root but double-crosses him and kills him and his men. He attempts to question Root about the Machine's location. Reese rescues her and the two take out Zachary's men but he escapes. (“B.S.O.D.”)

Greer assigns Zachary to escort Finch to a place where he can "serve" Samaritan. He takes Finch to a car but is interrupted Shaw and Root. Zachary and his men try to fight back until he gets shot by Shaw. (“The Day the World Went Away”)

After Reese and Shaw infiltrate Fort Meade, Zachary is sent to kill them. As the two talk with Finch, Zachary sneaks up on them but Finch warns Reese in time for him to fight Zachary as Shaw has a gunfight with other Samaritan agents. Zachary wins the fight, stunning Reese with a headbutt and goes to shoot Shaw dead from behind while she is distracted. However, Reese quickly recovers, grabs a knife Zachary dropped during the fight and flings it into his back, killing Zachary. Having been unaware of her predicament, Shaw is stunned for a second but thanks Reese, commenting that Zachary was getting on her nerves. However, Zachary's attack allows Finch to get away. (“.exe”)