View source
watch 01:36
We're Getting Mutants in the MCU - The Loop
Do you like this video?
Play Sound
Zero Day 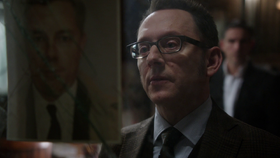 Reese and Finch realize that a virus has rendered The Machine erratic, causing it to issue numbers irregularly. As they race against the viral countdown, the team searches for a tech millionaire so elusive no one has ever seen him. Also, Detective Carter's mission to bring Cal Beecher's murderer to justice lands her squarely within the sights of the HR criminal organization.

The episode draws its name from the technological term a zero-day attack, an attack (or threat) that exploits a previously unknown vulnerability in computer software. Because the vulnerability is unknown, it leaves software engineers with no time to fix the weakness before the attack. The attack gets its name given there are zero days between when the vulnerability is realized and when the hack happens, leaving zero days to fix it before any damage is done. The flashback to the day before Finch proposes to Grace plays with the title when Finch declares it Day Zero of his new life.

In the flashbacks, Finch tells Nathan of his plans to marry Grace and Finch discovers Nathan Ingram in the Library working the irrelevant list.

The episode begins with a series of flashbacks consisting of brief excerpts from key scenes from the second season which revisit what happened previously:

"I was able to crack the virus' code and learn the name: Decima Technologies." (Finch) (“Trojan Horse”)

"...I believe they created the virus to infect a single target: the Machine."(Finch) (“Trojan Horse”)

"Unlike the CIA, my employers have an inkling of what happens next." (Greer) (“Dead Reckoning”)

"That storm on the horizon that I mentioned. I'm afraid it's arrived." (Finch) (“In Extremis”)