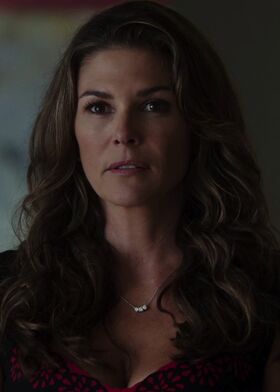 Zoe Morgan is a "fixer" and the occasional lover of John Reese. They meet when Reese and Finch help save her when The Machine gives them her number. She returns the favor by helping them out from time to time with persons of interest cases that require her particular skills and contacts.

Zoe grew up in a nice house in Yonkers, NY. Her father was a city official who became ensnared in a corruption case. The press camped out on her lawn for weeks, only dispersing when a man the party had sent to fix things showed up. This was what prompted her to become a fixer.

She spent the rest of her childhood in a small apartment in Queens with her mother (“The Fix”).

Meeting Reese and Finch as a POI

In 2011, when Zoe's number came up, Reese took a job as her driver to investigate. Zoe was hired by Mark Lawson, the CFO of Virtanen Pharmaceuticals, to retrieve an incriminating recording, purportedly revealing an affair. When she returned it to his men, they attempted to kill her, but she was saved by Reese.

Using her own sources, independent of Reese and Finch, Zoe figured out that the woman in the recording was Dana Miller, a former employee of Virtanen, who was going to blow the whistle regarding one of their drugs, and was killed before she could do so. Zoe chose to take down Virtanen with the information Dana gathered because she knew a girl once whose situation "kind of reminds [her] of Dana", but also because they tried to kill her.

When she and Reese were captured, Zoe appeared to betray him with a kiss, but used the opportunity to slip him a paperclip so that he could escape his cuffs. She led Mark Lawson to a naval yard, but he figured out that she had never really sent the information she had to anyone else. Before Lawson could do anything with this information, Reese showed up to rescue Zoe. Zoe gave Virtanen's competitor Beecher Pharmaceuticals a tip about the drug, then donated a large sum of the money she earned to Dana Miller's family to support their lawsuit against Virtanen (“The Fix”).

Working with the Team

Following her encounter with Reese and Finch, Zoe becomes an occasional resource on whom the team can call. She is loyal, clever, savvy, street-wise and well-able to take care of herself. She slowly gets to know the other players, and dialogue suggests that she has worked with the team from time-to-time off-camera.

The first time Finch calls on Zoe is to help them clear the name of a man framed for the murder of a senator by a mysterious hacker known only as Root. Zoe reveals knowledge of Pete Matheson being under investigation for corruption and helps Finch realize that he is behind the Congressman's murder to cover-up his own corrupt activities. Zoe offers her services to Matheson, revealing her knowledge of his activities. As planned, Matheson is spooked enough that he calls Root, allowing Finch to use a forced pairing of Matheson's cell phone to record the incriminating call and exonerate Powell. Afterwards, Zoe sees Reese briefly and flirtatiously suggests he might consider buying her a drink as payment for her services. After seeing Powell mobbed by reporters, Reese asked if she ever learned the two words the fixer when she was a kid used to make reporters go away. Realizing what Reese wanted, Zoe made the reporters leave Powell alone (“Root Cause”).

Zoe next contributes her skills while the team attempts to prevent the potential hit on a seemingly innocent professional therapist to be carried out by HR. She discovers that the therapist, Caroline Turing, is really "Root", and therefore the perpetrator setting herself up as the victim. Zoe tells Finch to be careful because she would hate if anything happened to their "mutual friend" Reese, indicating her growing regard for Reese. After realizing that Turing is Root, Zoe warns Reese too late to stop her from abducting Finch (“Firewall”).

In an attempt to help make Reese's date with Maxine Angelis more successful, Finch calls in Zoe who tells Maxine that she and Reese had shared "two long nights" together the previous year before departing. Maxine is impressed as any reporter would love to get a story on Zoe. After Finch anonymously sends her the identities of the two men trying to kill her, Maxine has Reese arrange a meeting with Zoe. Zoe tells them that she doesn't know who HR's boss really is, but suggests that its one of the mayoral candidates as Maxine got an anonymous tip leading to Christopher Zambrano's murder from a disposable cell phone and political campaigns buy disposable phones in bulk along with criminals. Maxine later suggests that Reese is attracted to Zoe, stating one of her reasons for breaking off their relationship is she thinks Reese is hung up on Zoe, something he doesn't deny (“Bury the Lede”).

In order to get closer to POI Graham Wyler, Finch sets Reese up for a quiet life in the suburb of Far Rockaway and Reese asks Zoe to pose as his wife. Zoe and Reese attend a barbeque Wyler throws at which he's spooked by a blank postcard. Using gunpowder and Zoe's makeup brush, Reese lifts one of Wyler's fingerprints from a beer bottle and sends it to Carter. As they wait, Zoe and Reese play poker to pass the time. After Wyler is identified as wanted thief Lloyd Pruitt and is being stalked by his associates, Finch installs security cameras and the three watch as Wyler heads out to meet with Chris Vaughn and Daniel Burnside, his former associates. Zoe stays behind with Finch while Reese leaves to accompany Wyler to the meeting and ensure his safety. While Reese is gone, Zoe talks with Graham's distressed wife Connie and comforts her.

After Graham disappears to do the job with Vaughn and his men, Zoe accompanies Reese to stop him. With Finch's help, they figure out where Vaughn and his men are robbing and Zoe uses a connection of hers to get them in the building. Zoe stays behind as Reese rappels down the building to rescue Graham and watches from across the street a few days later as Reese says goodbye to Graham. Reese and Zoe decide to "divorce" but also to spend one more night together in "their" house first (“The High Road”).

After Zoe helps John and Harold spot an assassin targeting Mira Dobrica, a maid in a hotel, John invites Zoe to stay with him in the penthouse suite, and she agrees. This is the first episode where it is clear Zoe and Reese are now lovers, although the extent of their relationship is unclear (“Booked Solid”).

Zoe services are next needed when Finch and Reese call on her to track down possibly killer Ian Murphy by posing as bait, along with Joss Carter and Sameen Shaw. At the end of the episode, Reese takes her home, although she playfully keeps him waiting while she finishes a drink with the women, suggesting their relationship is physical with few emotional ties. Its also suggested that after Zoe and Shaw were unable to find Alexander Wyatt's birth certificate, Zoe blackmailed his doctor into getting it for them as Carter mentions it was gotten by someone who has dirt on the doctors to the rich and famous (“Lady Killer”).

In order to buy Reese time to escape with Vanessa Watkins, Finch tips the police off to the location of an illegal gambling ring given to him by Zoe while leaving a stolen SUV they are looking for nearby. As a result of Zoe's information, Finch is able to misdirect the police long enough for Reese to get Vanessa to safety (“Reasonable Doubt”).